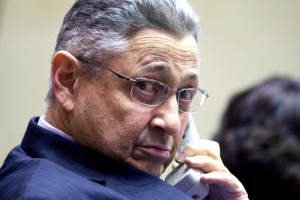 A year after his corruption conviction, ex-Assembly Speaker Sheldon Silver’s influence is still harming our courts.

The American Tort Reform Foundation now ranks New York City’s Asbestos Litigation court as its No. 3 “Judicial Hellhole,” after St. Louis and the state of California.

The ATRF report notes that the court favors plaintiffs even more than it did before Silver’s fall. Defendants continue to face liability beyond their level of responsibility.

And the court still favors plaintiffs with excess use of punitive damages and by regularly consolidating multiple cases into a single trial, making it easier to confuse jurors.

In part, it’s a legacy of Silver influence over the courts dating from the time he arranged for major asbestos litigator Arthur Luxenberg — the name-partner at Shelly’s old law firm Weitz & Luxenberg — to serve on a key judge-picking committee. Silver also blocked any and all tort-reform measures for decades.

The ATRF also faults the state’s highest court, the Court of Appeals, for expanding liability to cover companies that never made nor sold cancer-causing asbestos.

The average award for asbestos cases in New York — $16 million per plaintiff between 2010 and 2014 — is at least twice the size granted by courts nationwide, according to Bates White Economic Consulting.

If Gov. Andrew Cuomo truly wants to help New York businesses and fight corruption, he’ll encourage the high court to dismantle the Asbestos Litigation court. Letting this racket continue is an open signal that New York justice is for sale.