Why did meat become carcinogenic?

According to a report published today by the British newspaper «The Daily Mail», the World Health Organization (WHO) listed bacon, burgers, sausages and other meat products among potentially cancer-causing substances. Raw meat is also likely to be included in the «encyclopedia of carcinogens». According to the expert opinion, it is only «slightly less dangerous than preserved products». Other meat products, according to doctors, are not any less dangerous than such poisons as arsenic and nicotine.

Equating everyday products with substances unlikely to be eaten by anyone, is a reflection of the WHO’s dubious approach to substance risk and danger assessment.

Thus, the International Agency for Research on Cancer (IARC), a part of the WHO, researches causes of the emergence of carcinogenic substances in the human body. It’s not a secret that sources of such influence are ubiquitous and the IARC’s list already comprises over 90 substances and factors.

The problem is that the IARC persistently uses the term «risk» in its statements, while admitting that it does not assess the actual risk.

END_OF_DOCUMENT_TOKEN_TO_BE_REPLACED

The Anti-Asbestos Lobby’s New Way to Get Rich. Now it is Europe’s turn

Anti-asbestos lobbyists and activists are exerting pressure on the European Commission, demanding the establishment of a mandatory special-purpose program to dismantle every product that has ever been manufactured containing asbestos in the EU. The question is, whose interests does such a program really promote?

According to a document that journalists managed to get their hands on, the European Parliament is going to consider a declaration in December on the need for the complete removal of asbestos from all buildings and infrastructure in EU countries. Given the fact that a huge number of buildings in post-war Western Europe were constructed using asbestos-containing materials, we can get a feel for the scope of the potential market that the removal or abatement lobby is creating for its own personal gain. In Poland alone, the asbestos removal market totals approximately 9 billion Euro

In 2005, the anti-asbestos lobby forced the EU and a number of other countries to prohibit the use of all types of asbestos, regardless of profound biochemical and risk-profile differences between fiber types. The legislators ignored the fact that amphibole asbestos (the form of the mineral that is detrimental to human health) was universally prohibited well before the law was adopted. This means that the true purpose of the document was to snuff out demand for chrysotile asbestos, which is completely safe when used in controlled conditions. In fact, there isn’t a single field in the EU where amphibole asbestos can be mined, so the ban on this affordable building material provided synthetic fiber manufacturers with a competitive advantage. The adopted document became the foundation of numerous lawsuits aimed at seeking monetary compensation from people who worked with the supposedly harmful substance.

According to a study conducted by the RAND Institute for Civil Justice, by the end of the 2000’s the number of anti-asbestos lawsuits exceeded 600,000, with over 6,000 companies acting as defendants. The total amount of compensation is estimated at 200 to 265 billions USD.

The United States stands at the forefront of those seeking monetary recompense. Wide-spread legal campaigns helped the country earn hundreds of billions of dollars on anti-asbestos litigation. But by the end of the 2000’s many of these cases were marked scandals involving forgery and mis-representation. There have been cases where law firms (charging a commission of 70 percent) used the same X-ray image for thousands of individual applicants, or when they had a corrupt doctor give the same diagnosis to all of their patients, using information dictated by the lawyers themselves.

Today, the market for legal cases in the US is finally drying up. In their search for profit, anti-asbestos activists have now turned to a new prospect: the mandatory removal of asbestos — no matter if there is a health risk or not — and this can mean big money for decades to come.

The anti-asbestos lobbyists have also adopted a new slogan: «The best way to prevent asbestos-related diseases is to remove asbestos from the existing buildings and infrastructure, as millions of tons of this deadly substance still remain there today.»

And unlike in 2005 when the goals of the anti-asbestos lobby still seemed selfless (disguised as concerns about human health), the new requirements for its removal will cost taxpayers hundreds of billions of euros. Might these developments be planned rather than accidental, and actually betray a step-by-step strategy? What if from the very beginning lobbyists had been willing to subjugate the construction industry of EU countries for their own ends? In any event, the names of the final beneficiaries of the anti-asbestos hysteria are now out in the open.

Sharp-tongued campaigner Laurie Kazan Allen clearly has no qualms about besmirching the good name of those who disagree with her. 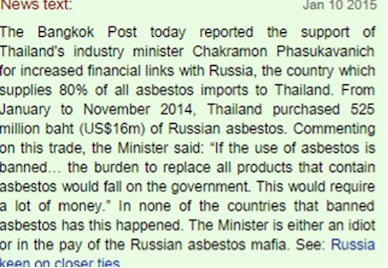 Having expected the Thai government to simply roll over and approve a ban on chrysotile, she didn’t take kindly when a minister questioned whether the move made any sense.

The Thai Cabinet has rejected the proposed ban citing the lack of evidence of asbestos-related disease in Thailand.

END_OF_DOCUMENT_TOKEN_TO_BE_REPLACED

A senior US judge accused Dr Barry Castleman, who charges thousands of dollars for his expert testimony in highly lucrative asbestos claims, of being “unreliable” and “inflammatory”.

Ruling his evidence inadmissible and ordering a retrial in a multi-million dollar case, a US appeals judge dismissed Castleman’s evidence as “hearsay”.

Castleman had accused the defendants of being “liars” and of “buying senators” without any evidence.

The judge said: “Dr. Castleman’s statement about (the defendant) engaging in bribery is especially egregious and requires a new trial.”

What are the anti-asbestos campaigners afraid of?

They have been lobbying loudly for the WHO to abandon research into cancer rates among 30,000 workers in the Russian chrysotile-mining town of Asbest.

The WHO says it is looking forward to the “important “results to “better quantify the risk” of cancer.

But the ban all asbestos lobby, funded with millions of dollars from the US law firms cashing in on cancer claims, says the researchers are biased and their work unreliable.

Anyone would think the campaigners and their wealthy legal benefactors are not open to a fair debate on the issue?

So long and farewell to Labour MEP Stephen Hughes, the self appointed scourge of the asbestos industry in the European Parliament.

He and his wife Cynthia must surely miss their taxpayer-funded lifestyle?

Mr Hughes once rejected wide reaching reforms of MEP’s allowances, which critics said was an endorsement of “virtual embezzlement”, to carrying on claiming and putting his wife on the public pay role with a salary of around £40,000-a-year.

However, his estimated £82,000 annual pension pot, topped up by the European electorate, should ease the couple into retirement.

Will the WHO see sense?

The WHO is all over the place.

On the one hand, it acknowledges that the health risks associated with chrysotile and blue and brown asbestos are vastly different.

On the other, it lumps all asbestos together and says, “the most efficient way to eliminate asbestos related diseases is to stop using all types of asbestos.”

Perhaps it would do well to pay more attention to the views of its members, for example the representative for Brazil, who said: “Will other WTO Members be allowed to ban products of developing countries that can be safely used with appropriate, tested precautions simply to appease the public?

END_OF_DOCUMENT_TOKEN_TO_BE_REPLACED

Attorney Steven Kazan whose Californian law firm earned $13 million last year — much of it from asbestos claims — has been using some of his hard won litigation fees to fund President Barack Obama.

Obama has rejected calls for greater regulation of the asbestos claims industry, and over the last few years Kazan, and his wife Judy, have thanked the President with political donations.

Mr and Mrs Kazan have sent more than US $700,000 to boost local and national Democrats, both from the offices of his burgeoning law firm, and from their charming Piedmont Italian-style villa (see picture).

Mr Kazan and his sister, Laurie Kazan-Allen, who runs London-based pressure group the International Ban Asbestos Secretariat (IBAS), have done more than anyone to keep the money coming in for the asbestos claim industry.

END_OF_DOCUMENT_TOKEN_TO_BE_REPLACED

Steven Kazan is a busy man.

An independent investigation into the opaque “operating procedures and activities” of the trusts providing compensation to asbestos claimants showed his firm was the biggest player in the market.

The trusts were set up to manage the assets of businesses bankrupted by asbestos claims, and Mr Kazan law firm represents more than half of them, controlling US$ 11.6 billion worth of assets.

The global merry-go-round of conferences and symposiums for the “ban asbestos” lobby continues.

How the researchers, scientists and lawyers afford the annual international airfares and hotels is anybody guess — although a healthy cut of the multi-million dollar compensation fees must help!

However, at least the International Mesothelioma Interest Group (iMiG) organisers apparently have seen sense with the location of its next event.

After taking in the splendour of Table Mountain at their Cape Town conference this year, the vote for the location of its next shindig was clear-cut.

END_OF_DOCUMENT_TOKEN_TO_BE_REPLACED

Despite living in a State-subsidised council house, leading asbestos campaigner Laurie Kazan-Allen certainly gets around.

So far this year, British-based Ms Kazan-Allen, whose American attorney brother has earned millions from compensation claims, has been on trips to Cape Town, Warsaw, Vienna, Berlin and Perth in western Australia.

How does she do it?